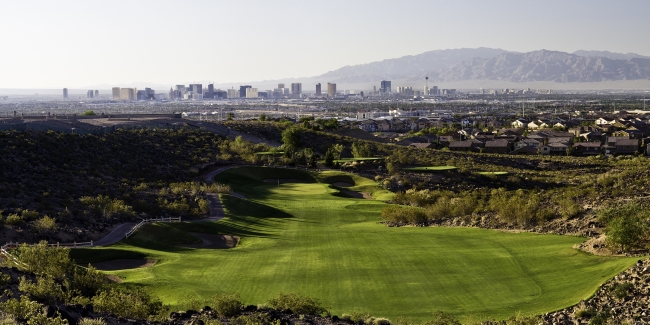 "I have really enjoyed working at Rio Secco again,” said Jones. “When I originally saw the site over 20 years ago, I knew it was one of the most unique pieces of land in Las Vegas. It's more rugged than most in the area. This helped us create the original big, bold layout long considered one of the world’s best. During the renovation, we focused on enhancing and optimizing this ever-changing landscape, including the already notable finish holes – 16, 17, and 18.”

Among other accolades, Jones is known as the U.S. Open Doctor for his renovation work on Bethpage Black, Torrey Pines South and five other U.S. Open courses. Courses he has worked on have hosted a total of 33 U.S. Open, PGA Championship, Ryder Cup, Walker Cup and President Cup events.

“The course has matured substantially in 20 years,” Jones added. “This renovation project gave us the opportunity to reclaim and enhance the features and shot options that made Rio Secco so special in the first place. We expanded the playability of the golf course, while increasing the nuances to challenge the best players in the game. Golfers will find Rio Secco to be an even more memorable experience that presents a different test with every round. It’s a great place to play on a daily basis.”

Harmon, who teaches the likes of Dustin Johnson and Rickie Fowler, applauded the changes and said he thinks the industry needs to do more for the casual golfer.
“These courses should be designed for the everyday player, not the tour pros,” Harmon said. “Making it easier and designed so golfers can play more quickly is exactly what golf needs.”

Renovation Details Include:
Greens: All putting surfaces were re-grassed with new Dominant X-treme bentgrass, and several of the green complexes were re-contoured to enhance playability and enjoyment.

Bunkers: All greenside bunkers underwent a major overhaul including new sand throughout. Select bunkers on more than 10 holes also were reconfigured and modernized.

Practice Facility: The practice range was lengthened, widened and original artificial turf on the practice tee was replaced with natural turf and expanded to 27,000 square feet. A new 4,500 square-foot putting green was built, and a practice bunker was added to the re-contoured chipping green.
Tees: Five new forward tees were installed on select holes dropping the yardage by approximately 340 yards to 5,419 yards total. This provides a more appropriate challenge for novice golfers as well as moderates difficult forced carries.

Other Minor Renovations: Other renovations include the sodding of approaches and green complexes to inhibit poa annua encroachment; cart path repair and replacement; as well as general maintenance to enhance the desert landscape such as trimming overgrown trees and bushes.

“We couldn’t be more pleased with the way the renovation turned out,” said Wright. “After 20 great years, we felt it was time to refresh the golf experience. Rees hit the mark by dramatically improving key design elements as well as addressing routine updates every golf course encounters after two decades of play.”