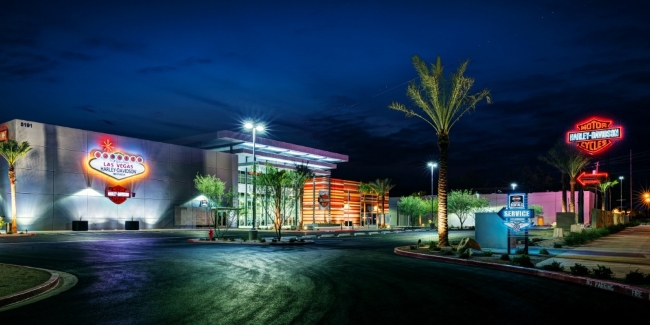 Las Vegas Harley-Davidson® (5191 S. Las Vegas Boulevard) has opened on the famed Las Vegas Strip, steps away from the Welcome to Las Vegas sign. The new store will commemorate its grand opening with an all day celebration and custom motorcycle raffle on Saturday, Nov. 1.

On Saturday, Nov. 1, Las Vegas Harley-Davidson® will host a grand opening celebration. Kicking-off at noon, the festivities will include appearances by professional dirt track riders, Jared and Nichole Mees as well as live performances by magician Seth Grabel, blues musician Michael Ubaldini and country singer Sierra Black. Patrons can also indulge in delicious dishes from local food trucks such as Sausage Fest, Sin City Dogs, Slindin' Thru, Stripchezze and Taco Fest. The event is open to the public and free of charge.

"This motorcycle is an incredible tribute to the State of Nevada," said Governor Brian Sandoval. "It is beautiful enough to be in a museum, but it is meant to be ridden. It will be an incredible prize for the lucky winner."